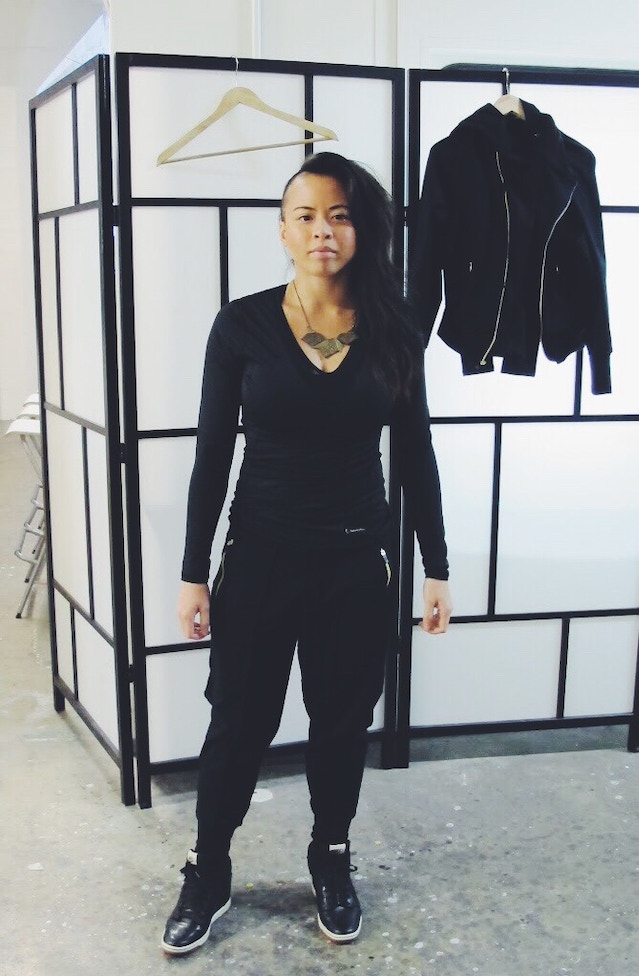 This is the twenty-fifth profile in our Society Nine Storytellers series where badass female fighters across all sports, media and culture in our community share their definitions of femininity, strength and empowerment and discuss what they fight for.

Have a story to tell? Submit it here! Tell us who you are, a little bit about your journey and what you fight for – in life and sport.

Fighting isn’t always physical or contained within sport. Though my passion for mixed martial arts itself has led me to this place now - as the founder of a woman’s combat sports brand - the truth is I had some life experiences along the way that always instilled the fight in me.

In the startup world, we celebrate that story about being “ramen profitable” in the early days, especially once you’ve achieved increased revenue year after year; closed fundraising rounds with coveted valuations; legions of loyal customers. You could say I knew what “ramen profitable” was at an early age.

I grew up in a very humble, hardworking Vietnamese immigrant household where we knew how to stretch dollars, always look presentable (because as my dad always said, you never knew what opportunities could be presented and you needed to look put together) and be fed. My parents were entrepreneurial with everything in their lives, from the household budget to what it was going to take to make the next professional move in order to improve the lives of their kids. We eventually made our way to a comfortable, middle class lifestyle that was a result of my parents’ devotion and conviction to provide. Once it was time for me to start making decisions that actually mattered - college, possible majors, cities to live in, part time jobs and internships (prom fashion and dates don’t count) - the fire in my belly was lit. Honor and a duty to make my family proud were all reasons to fight.

To fight, means to live with intent.

The earliest lesson I learned about fighting was watching my mom’s two-time bout with cancer - first with breast, second with liver. It just about wrecked me. I now thank every single day that she survived her fights, and continues to giggle and ride this entrepreneurial journey with me. But to this day, I still struggle talking about it, because I learned at a very young age (I was 13 and 18, respectively, when each cancer hit) how quickly life could be taken away, and how quickly the most important thing in the world could be taken away.

Business and professional successes, career, salary - all those things are man-made. You can re-create opportunities lost or failed. A mother’s love is not something you can re-create after it’s gone. Those experiences required me to fight to never lose sight of that amidst my pursuits.

As I entered college, it was a tough mental endeavour. My mom wanted me to thrive in school, and be happy - right as she was in the middle of recovery from her liver transplant. I was going to fight to make her proud. Within the first two weeks of school, I declared a double major, had a work-study job and an additional job - drinking as much coffee as possible. When I speak to entrepreneurship undergrad or MBA classes, it’s the number one job I encourage everyone to pick up. This job entailed playing up your “I’m a student” card to get as many FREE or heavily discounted memberships to business networking groups, conferences and events as possible, pitching yourself, creating relationships (I said relationships, not ask these people if they’re looking to hire) and collecting as many business cards as you can. Your job then is to follow up, Google stalk them to learn their business history, find correlations of potential career and passion interests with you, set up a coffee meeting and kindly ask for just a half hour of their time to learn about how they got to where they are. I fought to make a name for myself - it wasn’t going to be through getting straight A’s, in a private, closed off institution and stacking on campus credentials. It was going to be through the strength of my handshake, the sincerity of my “asks”, and my humble gratitude.

When I graduated college, I was armed with curiosity, ambition and a desire to constantly challenge myself. It’s engrained in my personality. On the fitness front, I was fresh off of running the Amsterdam marathon and learning fencing in France where I studied abroad, and I was looking for my next challenge. When I started Krav Maga I wasn’t really sure how I was going to do. Short all my life and scared of my own shadow, embracing the sport felt daunting at first.

It took a hard punch to the face the first time I sparred to realize that I can get back up.

I was that kid who, one slight nudge on the nose and BOOM. Bloody nose. So you can only imagine the sight, right? In my head, getting back up was one of the biggest decisions I ever made. Do I allow my embarrassment, mild hurt and the sight of blood sit me out? Or do I get back up and pick my opponent apart?  I went into panther mode. I planted the balls of my feet into the ground like a saber toothed tiger.

I found my groove - pump fake jab, then a combo I was really getting good at, a low left straight punch to the body, then an overhand right straight. Because I was short, with enough speed it totally caught the tall guys off guard. Being that my training partner was fighting in his heels, surely enough the overhand right rocked him backwards and he nearly fell. The round was soon over and my trainer came up to me and said just loud enough so that I would hear - I’ll never forget it - “That was so f***ing badass.” I never stopped since that day. I worked towards my brown belt in Krav Maga - one of the proudest moments in my life, taking that three-day, grueling test. I earned the respect of my owners as a result of my energy, discipline and push I gave the other students, enough that they gave me my own kickboxing class to teach. I also built the most amazing camaraderie of women who challenged, supported, and uplifted one another at every turn.

Fighting and being an entrepreneur have a lot of parallels. As a woman and a company founder, it’s taught me a LOT. The most important thing it’s taught me, above all else, is that power is mine to define. Not my size, gender, or background.

Fighting helped me take ownership of what is inherently beautiful about my god-given body and mind. True femininity is pure resilience and unbridled strength - in and out of the gym. Fighting gave me the confidence to overcome personal demons - from personal tragedies in life and in interpersonal relationships; to my own mental demons fabricated in my own brain.

I will always be imperfect - we all are - but now, I’m proud to take ownership of my weaknesses and be vulnerable. It’s helped me be a better entrepreneur, manager, daughter, sister, girlfriend and friend, because despite the glitz and the glam of ambition and “the hustle,” I am still human. And when the people on the other side of these roles I play see this, everything thrives.

What’s thriving in my life right now is Society Nine. The name was inspired by Title IX - where women have come since fighting for the right to play in college, to now professionally fighting amongst men on the mainstream stage, and where the future is headed for us as female athletes. What are we capable of? This society represents the modern female fighter - she can do anything.

What drives me every morning is knowing that Society Nine has the potential to unite women everywhere under the belief that we can uplift each other instead of tear each other down, and that our collective power is in our ability to embrace femininity through pure strength and empowerment.

We are enough. I fight for every woman to recognize that.

Lynn Le is the Founder/CEO of Society Nine. Aside from her passion and mission to build a brand for kickass women everywhere, she also really enjoys mentoring college and high school students on entrepreneurship and career building.

She hopes to create a lasting impact in not just the world of women's combat sports but women's athletics.

In her spare time, she loves to train, take voice lessons and cook.